“…Jay Stout deftly details the little-known and deeply disturbing tale of blunder and bluff that, on Palm Sunday 1836, led to the incredible Mexican massacre of hundreds of American captives at a long-forgotten Texas outpost. Powerful and fascinating.” 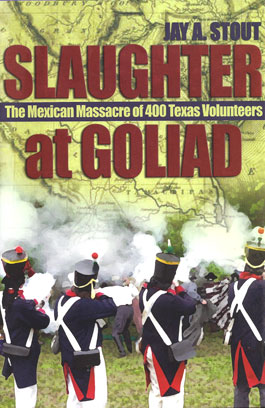 Texas lost many volunteers during its hard-won fight for independence from Mexico, but one harrowing episode stands out. Following a one-sided battle on the prairie near Coleto Creek, 250 mostly American prisoners were marched back to the presidio at Goliad where they were joined by more than 200 others. Subsequently, on orders from President Antonio Lopez de Santa Anna, they were brutally slaughtered on Palm Sunday, March 27, 1836. The loss of so many fighting men in a single day was, at the time, one of the largest in U.S. history. The reaction in Texas was one of horror, fear, and, for some, a lust for revenge. The revulsion felt throughout the United States turned American sympathies against Mexico and its efforts to preserve its territorial integrity. Based on extensive research, this book offers a powerful description of what happened and an astute analysis of why it happened. For historical background, it also presents an overview of Texas and Mexican history and the factors that led to the massacre.